When God Incited David to Do a Census and Punished Him For It: 2 Samuel 24 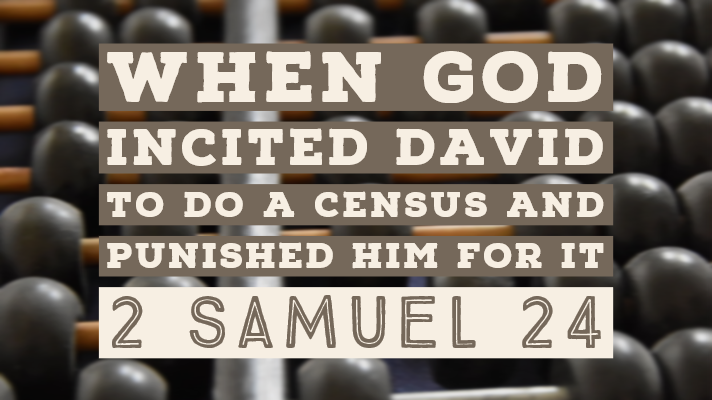 2 Samuel 24
“Again Yahweh was angry with Israel, and he incited David against them, saying, “Go count Israel and Judah.”  LEB

If you thought my last blog was difficult (click here if you missed it by mistake, because you read everything I write), then this one will certainly not be any easier to grapple with.

This entire story is odd. So peculiar, in fact, are the stories from the last 4 chapters of 2 Samuel that many scholars believe that these are additions to the original book of Samuel (see Robert Alter’s wonderful translation/commentary: “The Hebrew Bible”). The language is noticeably different than that used in the previous chapters. Even the depth of character of those involved is quite different than what we see in the other accounts that lead up to this section of Scripture.

I only bring this up to say that people have noticed that these last stories are not what we might call “normal“.

And let’s be honest: there is nothing normal about a story where God incites someone to do something and then later punishes them for having done it. It is always the other way round…but not this time. And the word “incite” has a general connotation of misleading, enticing and diverting…not typically a good or God thing (see BibleHub).

Since when did God get in the business of misleading people to commit sin so that he can ruthlessly punish them?!!! My Bible says that God doesn’t do this…like, ever!!!

And yet, here, in the FIRST verse of this story, we see God doing just this thing. He is angry with Israel about something (we are never told what He is initially angry about) and incites David to do something David isn’t supposed to do.

It may be worth noting that the verb incite doesn’t necessarily mean that it is God who is doing it. It could possibly be “it” that is doing the inciting or misleading – the “it” being a reference to “the anger” of God. However, the context and structure of the sentence makes God the most likely candidate for who is doing the inciting. This is why a great many translations place God as the subject of the verb.

Some people (just do a Google search of 2 Sam 24 and you will see) try to explain this away by pointing out that the parallel story found in 1 Chronicles 21 states that it was Satan who misled and enticed David. For them, this solves the problem. But for me, it does nothing but raise more questions that don’t seem to have answers. After all, doesn’t Satan get permission from God to go do what he does? He needed permission to afflict Job. (Actually in Job, God says that Satan “incited” Him to allow Job to be afflicted for no reason in Job 2:3)

RABBIT HOLE
If you want my opinion (and I know you do) I think the writer(s) of Chronicles struggled with the idea of a perfect and holy God deceiving and leading David to sin. Perhaps they changed this to Satan to help their theology. Who knows? I certainly don’t, but I do suspect that something along these lines is happening. I mean, if I were rewriting my nation’s story, I would want to change this somehow. And as stated in other blogs, Chronicles is known for omissions and tweaks here and there.

What I do know is that God, as I understand Him, doesn’t mislead people. Ever.

As the story in 2 Samuel continues, we see that David does conduct the census that he was incited to do. Afterwards, he feels incredibly guilty for having counted his fighting men. He knows he isn’t supposed to do (though how he knows it is wrong is a bit of a mystery. Censuses are not forbidden by the law) . He approaches God, confesses his sin and asks for forgiveness, to which God says, and I paraphrase with quotation marks: “Uh…no. It’s not that easy, pal. Instead of forgiving you, I will allow you to choose which of 3 evils shall befall the people of Israel:
A.) 7 years of famine
B.) 3 months of you fleeing from your enemies
C.) 3 days of plague“

Now, I think of the three options, there is one very obvious choice. One that will protect the people from massive death. And David, being David, basically says, “I don’t care which one happens, so long as I do not get captured by my enemies.”

Uh…hey David! Who said anything about getting captured? You were going to be on the run, something you seemed to be pretty good at when you were younger. Besides this, even if it meant that David and his men would be captured and killed, isn’t that better than famine or plague that is sure to kill thousands?

At any rate, David doesn’t want to choose option B. Anything but B.

So, God chooses option C (why C? You got me. I have no idea), sends a plague and 70,000 men (somebody had to count…weird) from Dan and Beersheba die. As the Angel of the LORD approaches Jerusalem, God stops him and says that 70k is sufficient. He stops at the very spot where the Temple would one day be built. For now, an altar was built unto God in this spot. Sacrifices were made, the anger of God was appeased and God ended the plague.

For those of us who were taught to never question anything we see in the Bible, this story may not cause any issues. You may simply say that God certainly had a reason to act this way, even if you can’t ascertain what that reason might be.

Fair enough I suppose. I will respect your approach, so long as you never take this and other troublesome stories as a prescription for how you are to act.

However, there are others of us who read stories like this and are unable to just throw our hands up in the air and accept that this is the behavior of a loving and forgiving God (or even of a just and judgement-type God).

It feels wrong for a few reasons:
1.) God told him to do it
2.) God doesn’t trick people into sinning
3.) God forgives people when they repent
4.) God doesn’t let people pick their punishment
5.) God doesn’t punish others to the tune of 70,000 dead for the sin of one man, while that one man goes unpunished
6.) God doesn’t want His temple, the very place of his presence and grace, to be located at the end of a trail of human carnage and death (the reason given to explain why Solomon was to build the temple and not David as David was a man of violence)

In fact, there is very little about this story that seems to reflect the image of God as I know Him.

For now, I can’t really draw any (sorry). Well, I mean, I suppose I could, but they would seem forced. The fact is that I have no idea what to do with this story for now. It stands out as a story that I will simply have to continue to wrestle with as the God revealed to me in Jesus, when confronted with His enemies, dies for them…not the other way around.