The Sacrifice of Seven Sons 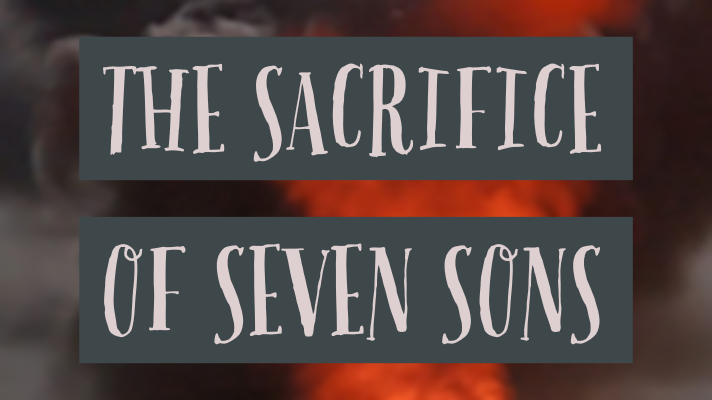 This may seem obvious to you, but God doesn’t want you to sacrifice your babies to Him. Here in Leviticus, and elsewhere, God makes it pretty clear that He has no desire for us to kill off our offspring just to try and make Him happy. You can’t cure familial curses this way, or bring back the much needed rains, or jump-start the stock market by offering up your little ones to Him. He isn’t that kind of God, so feel free to keep loving those babies.

Of course, it wasn’t always so obvious to humanity that this isn’t how the world works. For ancients (and some moderns I am afraid), there is a god behind every nook and cranny of creation. And these gods are pretty cranky, often lashing out against mankind for the pettiest of reasons.

In the Epic of Gilgamesh, the gods flood the earth because those darn humans/slaves are too noisy. And everybody knows that the gods need their beauty sleep…sleep that evades them with every scream and laugh of the petty people of earth. Time to get their killing on!

Well, except one goddess makes the realization that if they kill all the slaves, then there will be no one to bring them their food (AKA: sacrifices). So, she saves one guy, thereby saving them a lot of work down the road. Crisis averted.

The point is, when life wasn’t working out, humans have always felt the need to make some god somewhere happy so he or she can get back to blessing them, their children, their fields, their battles, their…you get the idea. If a bird didn’t bring the rains, maybe a goat would. If a goat didn’t, perhaps a cow will do the trick, or two, or five. Soon, the need to remove the cursed drought grew so large that people thought that giving the gods your firstborn child might appease them. I mean, how could a god deny them after giving this gift, the ultimate sign of devotion and respect?!

So, it makes sense that a loving God would forbid this type of practice, making it punishable by death.

Which, makes stories like this one from 1 Samuel 21 utterly confusing and, quite frankly, appalling.

The Sacrifice of Seven Sons: 2 Samuel 21

The story starts by noting a 3 year famine that had been afflicting the nation of Israel. When David asks God what was the cause of this famine, God tells him it is because of something Saul had done to the Gibeonites. Though outside of this text, the Bible makes no mention of this event, this passage states that Saul was angry with them, presumably for tricking Joshua (some 400 years prior) into saving them during the conquest. So, for whatever reason, Saul was angry with the decedents of this people and murdered them. Because Saul did this, God had withheld the rains.

David calls the Gibeonites and asks them what they want so that the they may bless the people of God, the assumption being that God will lift the curse once the people are happy. (Just for the record, I have no idea how this is supposed to work out. My understanding of God wrestles with the concept that David seems to easily embrace.)

So David prepares the sacrifice…er, gathers the children (perhaps they are adults, not that this is softens the blow any) and brings them to the Gibeonites. The Gibeonites take them to the mount of Yaweh and impale them right around the time of Passover. Saul’s lesser-widow, Rizpah, is forced to protect their dead bodies as they rotted, shewing away the birds and wild beasts as they weren’t given a proper burial after their murder. (When’s the last time you heard a sermon from this text?)

David hears of her actions, gathers the stolen bones of Saul and Jonathan along with the bones of those sacrificed and gives them a proper burial (though, it should be pointed out that the Bible only tells us about the burial of Saul and Jonathan. The other bones are collected, but it doesn’t state they were buried, though it is likely that they were.)

After the sacrifice of the seven sons, God heeded the prayers of Israel and let the rains return.

So…what is a story like this doing in our Bibles? God was pretty clear that any sacrifice of humans was unacceptable and punishable by death. So why is God seemingly pleased with this action?

Wil Gafney, in her book, Womanist Midrash, points out that it wasn’t at the death of the seven sons that God let the rains return, but rather at the burial of the bones, stating that perhaps this is what God really wanted all along. Not sure I agree, but I don’t disagree either.

The commentaries at BibleHub also struggle a great deal with this passage. Matthew Henry states: “The Gibeonites did not require this out of malice against Saul or his family. It was not to gratify any revenge, but for the public good. They were put to death at the beginning of harvest; they were thus sacrificed to turn away the wrath of Almighty God, who had withheld the harvest-mercies for some years past, and to obtain his favour in the present harvest. In vain do we expect mercy from God, unless we do justice upon our sins. Executions must not be thought cruel, which are for the public welfare.”
Not sure about you, but I find this line of thinking extremely wrongheaded and dangerous.
Matthew Poole states, when asked why David was allowed to do this: “Because he had special warrant and direction from God about it, who, as all confess, can dispense with men’s oaths and with his own laws when he sees fit. And that he did so here is manifest, because God was pleased with it, and removed the judgment upon it; whereas otherwise David had been guilty of the same sin with Saul, to wit, of the breach of his oath and covenant, for which this famine was inflicted.”
Again, I am not drinking that Kool-Aid. But I admire the struggle to make this story more agreeable.
In Gill’s Exposition, he states: “…they hanged them in the hill before the Lord; in the hill at Gibeah, that they might be seen by all that passed by, and serve to deter from such evils, which brought on them that punishment…”
It was like a PSA, for the greater good. Again, I just can’t get there with this story.

But, then…where do I get with this story? What do I make of it? Well, for now, the only thing that makes any sense to me is that David is doing what I have seen David do in other places. He seeks out a spiritual connection and answer where there probably isn’t one. A 3 year famine has to mean something! God is angry with us, but why? What did we do to deserve this? The answer: Saul sinned and atonement must be made.
And how? By impaling the 7 sons of Saul and then letting them rot until the rains return. I mean, you can’t bury them until the curse is lifted. Otherwise they might die in vain.

David is a man, an ancient human living in a time where people thought actions like this might actually work. Of course, you leave the bodies out there long enough, and it is bound to work. It can’t “not rain” forever. Eventually the rain will fall and David will be convinced he did the right thing. I think David was wrong.

I do not know where you stand, but this might just be my new, least-favorite Bible story. But, you can’t just give up on stories like this. You must wrestle with them.

CHECK OUT MY AUTHOR PAGE AND SUPPORT ME BY BUYING COPIOUS COPIES OF MY BOOKS. JUST CLICK HERE!!!!