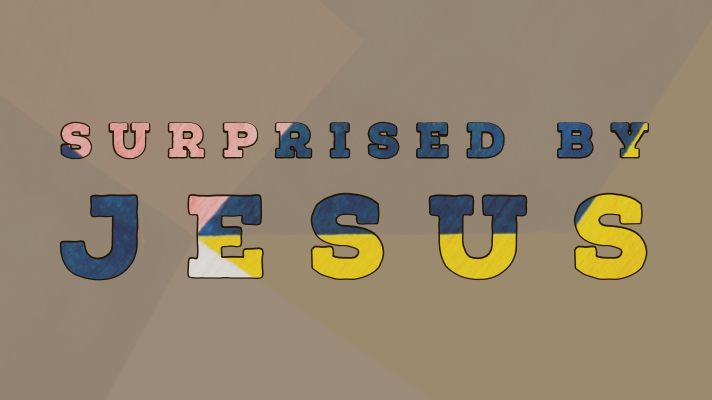 The thing about following Jesus is that, if you are paying attention, you will see that he is full of surprises. He is constantly misbehaving, bending rules and generally doing things as he sees fit.

You don’t have to read very far into the gospel accounts before you realize that the Christ is a bit of a bounder. And, before long, you are bound to be surprised by Jesus.

One of my favorite stories from the gospels is when Jesus is with his disciples, rubbing grains in his fingers and eating on (dramatic pause…) the Sabbath.

Of course, this type of activity is an absolute “no-no”. And it isn’t the kind of rule-bending that one can easily chalk up to Jesus challenging the traditions of man. No, this rule is firmly established in the sacred writings of his ancestors. The Law of Moses is very clear that food preparation is not allowed on the Sabbath. And the consequences for such activity is equally clear. Those who do such things (work) are to be put to death.

And yet, time and time again, Jesus does things that are considered “work”, just the kind of thing that is forbidden. And, every time he does, he is accused of being a law-breaker.

What does Jesus say to defend himself against such accusations? What counter-text, specifically about the Sabbath, does he provide to show that what he is doing is allowed?

Well…none. (surprised yet?) Jesus never once offers up a time in the Hebrew Bible when God makes exceptions for those who would do work on the Sabbath. He doesn’t cite a verse that shows special circumstances under which a person could work…you know, like a life-or-death type circumstance. No. There are no exceptions to this rule. It is literally set in stone.

Much to the accusers surprise (and ours if we have ears to hear), Jesus offers up the strangest of reasonings for why he is allowed to do what he insists on doing. He states that David, while fleeing from king Saul, ate bread that was unlawful for him to eat. He ate the showbread that was meant for priests, as prescribed by the Law of Moses. And, well…David was fine. God didn’t punish him for doing so, therefore Jesus can rub grains and eat of the Sabbath. This type of explanation seemingly shouldn’t work.

I think we have gotten so accustomed to the Jesus stories that we don’t really pay attention. Because, if we were, we have to admit that Jesus’s line of logic here doesn’t seem very strong. If Jesus were debating someone today and offered up this as to why he is allowed to do what he does, I am pretty sure it wouldn’t fly.

And yet, often the things Jesus says does work. It does fly. And this surprises me. Perhaps it does you as well.

One such instance comes to us from the gospel of John, chapter 8. Those who are looking for Jesus to make a lawless blunder have stumbled upon the perfect opportunity. They have caught, red-handed, a woman who was in the very act of adultery. Per the Mosaic Law, this woman is to be put to death. Like the Sabbath, there aren’t any special circumstances under which she might be able to escape the death sentence.

Some Bible readers are quick to point out that this was possibly a total set up. “Where is the man?” they ask. “How can they say she was in the very act, but only capture 1/2 of the sinful pair?”

Unfortunately we do not have the answers to these questions. But my guess is, even if we did, it wouldn’t matter. We might think, “Hey. I bet one of those judgmental accusers was the other half of the damning duo.” To that I say, “so what?” Or, “She was innocent! This was nothing more than a trap!”

I mean, you may be right, but in the end it doesn’t matter. Either way, the Law is against her. There are more than enough witnesses testifying against her. And even if the accusers are protecting one of their own, the issue presented to Jesus is the same.

What should happen to this woman?

Jesus appears to be in a bit of a pickle. The Law clearly and concisely states she is to die. There is not confusion here. But will Jesus actually condemn a woman to die, even if she is guilty?

As we say before with the Sabbath bending, Jesus doesn’t conjure up some long-lost text that allows for her to be set free. He doesn’t even talk about David’s permissible lawless acts of bread eating. In fact, he doesn’t offer up much of a defense at all.

Instead, he bends down to the earth and writes in the dust. What did he write? Again, answering this is an exercise in futility (though fun for Bible nerds).

What we do know is that he wrote something in the dirt that day. Did he really think that whatever he wrote would carry more weight than the Law of Moses, delivered by God (through angels) to Moses on the mountain covered in smoke and lightning?

The answer to that question seems to be “yes.” Once he is done writing, he looks up and makes a statement that I am still surprised at.

“He who is without sin, cast the first stone.”

For the life of me, I can’t understand how this worked. Nowhere, and I mean nowhere, does the Law of Moses require those who would execute the law to be without sin.

When in Numbers 15 the people were commanded to stone a stick-gatherer to death because he had broken the Sabbath command to “do no work”, neither Moses nor God stipulated that the ones with stones be sinless. I mean, if this were the prerequisite, how could anyone do anything the law commands?!

And yet, despite my questions and hang ups, all those there with Jesus that day dropped their stones, oldest to youngest, and walked away with no blood on their hands. This is absolutely surprising to me.

What Do We Make of These Surprises?

The number of take-aways one could get from this surprising Jesus are probably near endless. But, here are a couple of things to wrestle with:

The clearest message is this, in my opinion (which is certainly the right opinion). If we read our Bibles and, in so doing, we feel compelled to pick up stones, we are reading it without the writings of Jesus. We are reading the word without the Word, and when we do this, we are probably going to get it wrong. Terribly. Wrong.

Jesus never met a Bible verse that intimidated him. He never met a passage that compelled him to act less like Jesus and more like you or me or them. The Bible is subject to him, his character, his person. And here, when the Bible acted different than Jesus, he wrote something new. Those with stones in hand left…empty-handed.

Another thought to ponder is that perhaps the purpose of the Law wasn’t to take it and reflect its judgments onto others, to reveal all of their short comings and utter failures. Maybe, just maybe, it was meant to be used for inward reflection. If reading the Bible only exposes the sins of others, you are reading it wrong.

No, it should expose our own sin and lawlessness. And when it does that, you will never pick up another stone.

Are You Surprised by Jesus?

Support Coyle Ministries and Get Smarter!
Click here and buy multiple copies of my books.