Leviticus 10 and the Overly Worried Church 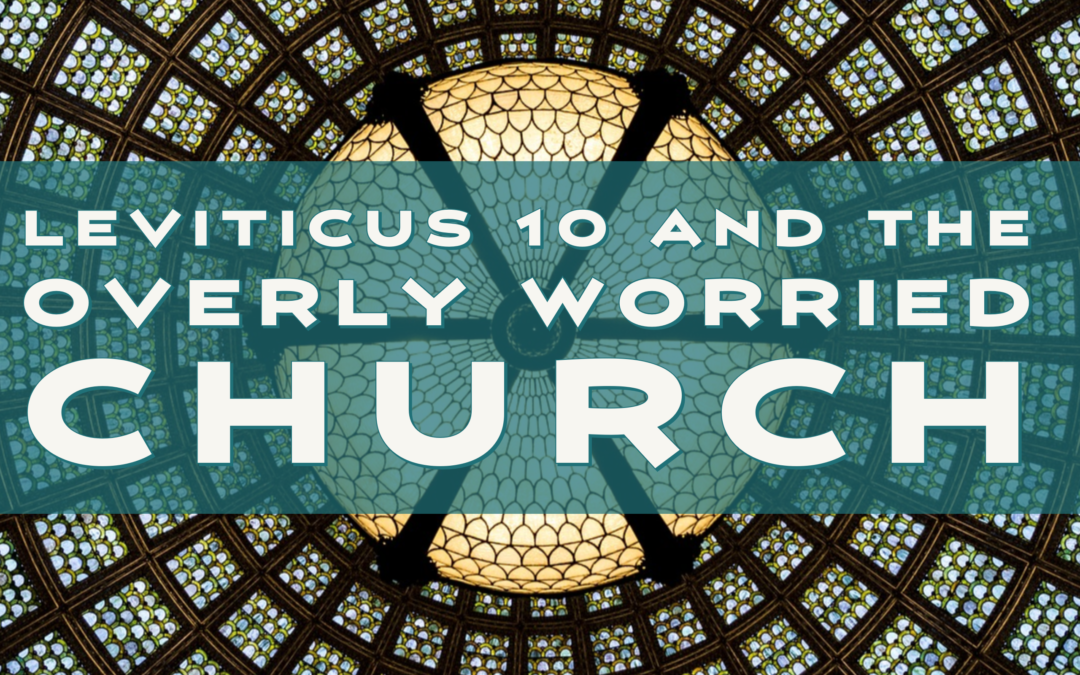 I was once asked a question regarding the Lord’s Supper. The question was in regards to what the church’s (churches of Christ) rules or guidelines were in regards to who can and cannot partake.

The congregation I am a part of has never, in my time here, taken time to give detailed instructions. We simply pass the trays and those who take it, take it and (as you might have guessed) those who don’t…don’t. We like to keep it simple.

But this isn’t the case in every church. Some places make it very clear who can and cannot eat this bread and drink this cup. And the driving force behind the need for clarity is a belief that everything must be done in a certain way, everything in order. We have this need to control every facet of what happens in the walls of the church. Who can take the Lord’s Supper. Who can lead a prayer. Who can sing a song.

We believe that strict guidelines will allow us to have a service that is “pleasing in Your sight.”

I mean, we have some pretty good stories about what happens when God’s servants get lazy or careless. They end up dead, perishing in divine fires that surge from the presence of God (see first blog here).

If you didn’t last time, go ahead and read Leviticus 10 and pay close attention to Moses. Because Moses is like the overly worried church. He seems to have been gifted with the ability to pay attention to detail.

Moses was selected by God to oversee the building of the first tabernacle. He as given a pattern and he followed it to the “T”. No detail was too small. It had to be perfect. And when it came time to offer the first sacrifices at this tabernacle, Moses was still in detail mode. In fact, when his nephews Nadab and Abihu died in that fire, he went into hyperdrive.

His main concern, was simple. He understood the deaths to be caused by an infraction of the law he had received and passed on. Nadab and Abihu got lazy and ended up dead. They were careless and incurred God’s wrath. If Israel has any chance of making it past the first ritual sacrifices alive, they had better button-up any loose ends. They better get every detail right. They had better make sure that all things are in order and that the remaining priests don’t incur the wrath of an already angry God.

The best was to do that was for Moses to worry and stress over every aspect of what was left to be done. Because that is what God wants…every thing to be done in a precise way and time. Otherwise, He gets upset and people end up as lifeless corpses, having been burned alive.

This, it seems to me, has been the church’s preoccupation as well.

Who can take the Lord’s Supper? We had better figure that out ASAP, lest our service be displeasing to God.

Can we use instruments in service? We had better not, lest God be displeased with us.

Can women lead in public ways? Well, we had better play it safe. Wouldn’t want God upset with us.

Can we have fellowship with those who worship in a denomination? Probably better set some hard-and-fast rules on who we call brother or sister. We should come up with an “informal” list of identifying attributes so we can know who is saved and who isn’t (or, know that we are saved).

And so we channel our inner Moses. We look for patterns by which we can decide who is in and who is not. We write letters to other churches, warning them of the heresy of some preacher or congregation somewhere that allows clapping and the raising of hands. We condemn any church that carries a different name than our own. We think we are doing God’s will.

In the end, it is Aaron, not Moses, who seems to know God. As Moses was running around and double-checking every aspect of the ritual, he told Aaron and his remaining sons to not mourn or weep for their family. He even commanded them, just as God had said mind you, that they had to eat the portions of the sacrifices that were theirs to enjoy.

But Aaron refused. He disobeyed Moses and, more importantly, he disobeyed the law of God given to Moses from God Himself.

Moses was furious and convinced that Aaron and his sons had messed up everything…”He’ll most likely kill them in the morning” (sorry, couldn’t resist).

But Aaron is not worried. He doesn’t see God the same way Moses does. Moses is seeing God at this point as a strict and punitive deity, ready to strike out at the slightest infraction. Aaron, having heard from God directly, sees God as concerned for His children, offering advice on how to proceed more safely in the future.

Aaron is convinced that God has no plans to lash out and kill anyone else that day, least of all Aaron for not being able to eat after the loss of his sons. Aaron seems to know something Moses doesn’t. He knows that “that” is not who God is. He trusts God to understand. From Moses’s perspective, Aaron places his very life in God’s hands.

The church has a lot to learn from Aaron. But, perhaps the lesson can only be heard by those with ears.