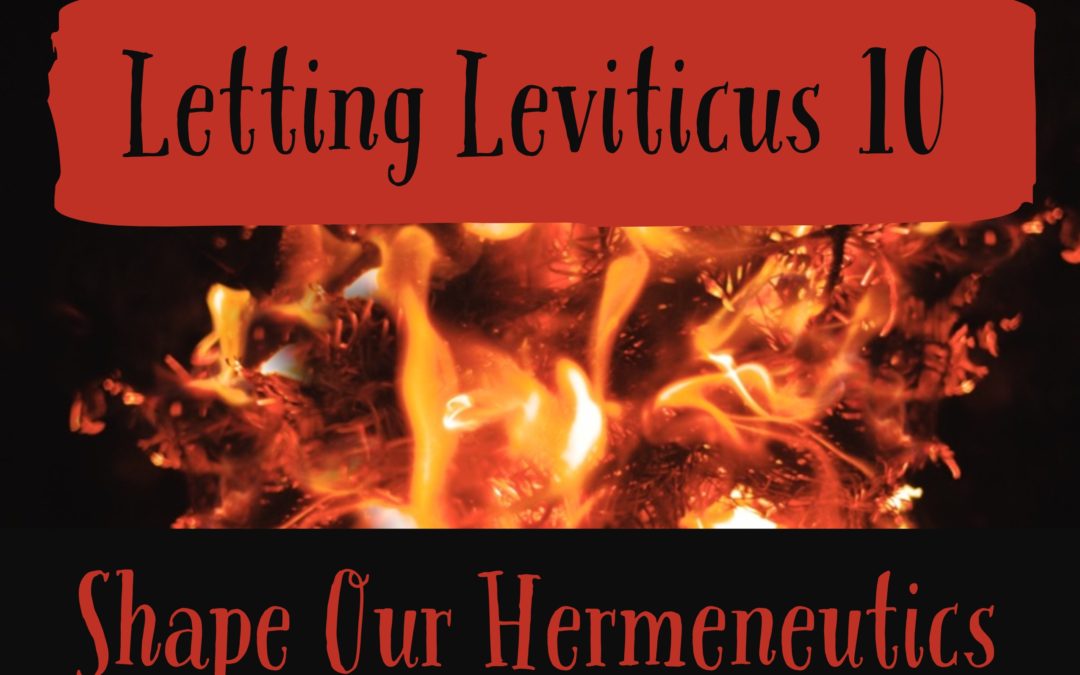 If we believe, as Paul did, that all Scripture is God-breathed, then the very way we read our Bibles and understand our sacred texts should be shaped by the text itself.

I am not here speaking about “context, context, CONTEXT!!!”. The more I read my Bible, the more convinced I am that the authors of Scripture were not overly concerned about this, especially when thinking about how the authors of the New Testament wrote about Jesus.

No, I am referring to the concept that the inspired stories found in our bibles can shape, sometimes in surprising ways, the way we understand and apply other passages of Scripture.

Leviticus 10 is one such passage.
(go ahead and read it, if you like stories of priests dying in fires and the like)

In this account, we have Aaron (he didn’t ‘done messed up’ in this one) and his two sons, Nadab and Abihu, who are about to attempt the very first ritual and sacrifice to Yahweh. They have spent 7 days preparing for this moment, consecrating themselves to ready their minds and spirits for the task.

Unfortunately, they weren’t aware that serving in the tabernacle while drunk was a very bad idea, especially when fire is involved (go ahead and read it…pay close attention to the only time God speaks in this entire account). The Bible tells us that they offered a “strange fire” and a fire from the presence of God flashed out and consumed them.

It appears that we have a story on our hands about just how harsh and judgmental God can be. I mean, they made one mistake and they paid with their lives. Seems over the top, and as we see in the actions of Moses, steps must be taken to make sure God doesn’t lash out again at some other infraction.

So, Moses does what he always does. He checks and double-checks the rest of the ceremony. Sure, two guys just died and all, but the show must go on, and it must go on perfectly from here. Otherwise, God might just send a fire to consume them all. Ain’t nobody got time for that!

While he is checking on everything, he notices that he cannot find the goat that was sacrificed for the sin offering. The priests, Aaron and his other two sons, didn’t eat it as prescribed. Moses is indignant and fears they may have just doomed themselves and who knows who else to a divinely directed death.

I mean, Moses had told them what to do, what the Law told them to do. They priests weren’t allowed to cry or mourn the loss of their brothers in any way. He was very clear that they MUST eat the sacrifices, no questions asked, no exceptions.

But, that goat was never eaten. Instead, it was completely burnt to a crisp (turned to smoke).

Moses confronts Aaron, as it seems that he has indeed “done messed up”, and condemned them all.

And then, out of nowhere, Aaron retorts with the most amazing response.

“Listen Moses. We did everything else you asked of us. But we are not going to sit down and enjoy a meal just hours after the death of our loved ones. Do you think God would be pleased with us if we had done this?”

The story ends with Moses seeing his point, and they all lived happily ever after until the book of Numbers.

Did you notice what Aaron did? He refused to obey Moses and, for that matter, God. Yet he and his remaining sons didn’t die.

And he didn’t back up his actions with alternate passages of Scripture. He didn’t say, “But isn’t it also written that…..”, in order to convince Moses he was in the right.

I LOVE THIS STORY

There are many lessons that can and should be drawn from what happened to Nadab and Abihu, but far too often we let the story end there, often even overlooking the reason that God says they died…because they were drunk. But the story doesn’t end there. It goes on and we see a God who is full of compassion and understanding. It was Moses who was harsh and demanding, not God.

We must learn to embrace the understanding that Aaron had that day. He relied on and depended upon the love of God. And, even when there were precise directions on exactly what to do and how, he disobeyed, not because he no longer loved God, but because he trusted God to understand why.

We make lists and regulations that rival that of the Old Testament Law to determine who is my brother and who isn’t. And we line up this passage and that passage to prove our point.

Which is why I love what Aaron did. No passage. No prooftext. Just a simple trust in a God of love who would never dream of forcing them to eat a meal and shed no tears. And, HE WAS RIGHT!!!

Imagine with me if in Acts 6, when the apostles instructed the people to select 7 men, full of the Holy Spirit and highly respected, in order to feed the Hellenistic widows who were being overlooked, that they weren’t able to find 7 men who “met the qualifications.” What if they came back and said, “Uh…we found 3 guys full of the Spirit, but the people don’t speak highly of them (because of their past). We found 2 other guys who are very well respected, but we have reason to suspect they aren’t Spirit-filled. We found 2 more men who meet both characteristics, but surely that isn’t enough. What should we do?”

Now imagine if the apostles responded, “Well, we said 7 Spirit-filled, well-spoken of men, didn’t we? You only have 2 at best! Tell the widows to find food somewhere else. Let’s pray they don’t starve to death.”

Leviticus 10 won’t allow us to understand our Bibles this way. It won’t allow us to say, “Well, we don’t have any men who meet the qualifications of an elder, so we will remain without leadership indefinitely. Remember what happened to Nadab and Abihu!!!” Instead, the story says, “remember what didn’t happen to Aaron and his two sons, Ithamar and Eleazar!”

Or, “We can’t have women leading anything at church if men are there…look at what Paul said!” (for more on women’s role in church, see my book, The Silencing of God’s Woman…you’ll love it) We must be more like Aaron and assess the situation to see if the letter of the law is the appropriate response in every situation and every culture for all time, or if there might be an exception (not that I think the Bible restricts women. Again, read my book).

Read it all.
Absorb it all.
Reflect and meditate on it all.