In The Beginning There Was a Dome 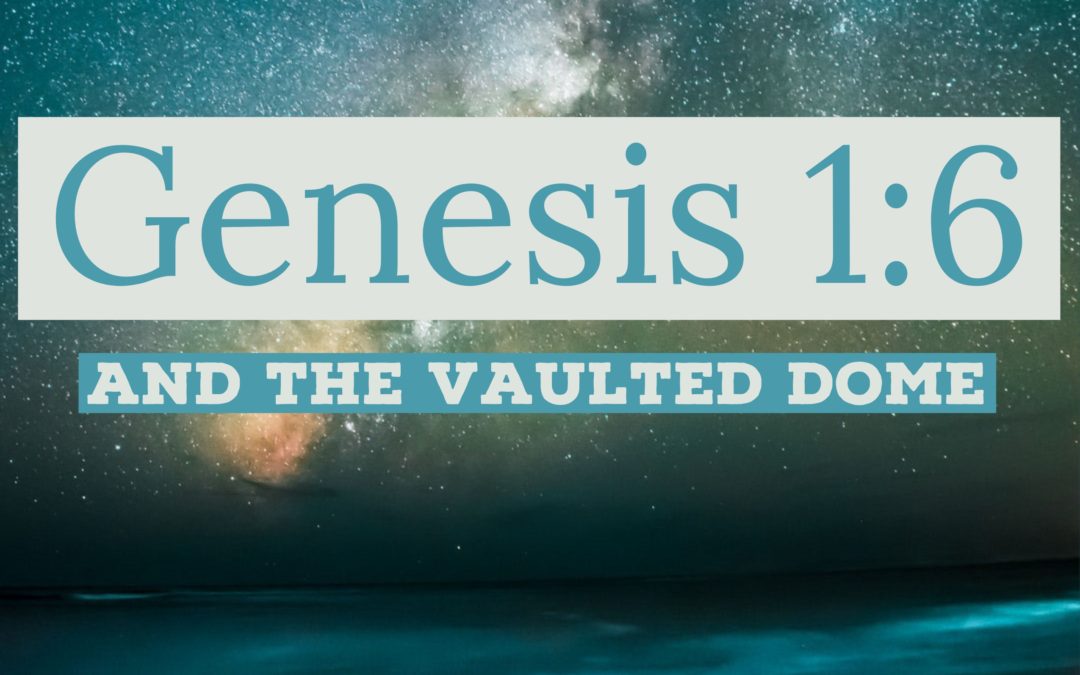 When I was younger, I never really questioned this verse. After all, my translation didn’t get as literal as the LEB in describing exactly what ancient people thought when they heard this verse. The version I grew up with said “firmament”. Later on, I had a translation that said, “expanse”.

Neither word really had any meaning for me…not in the slightest. I imagine I am like you. We didn’t walk around talking about how nice the firmament was today or if our conversation partner happened to notice the expanse last night.

These words are not common and haven’t been for quite some time. But, “Vaulted dome”…now that means something.

When I hear “dome”, my mind goes directly to structures I am all too familiar with. Sports arenas with arched domes that stretch from one wall to another, allowing the space beneath the dome to be uninterrupted by support beams and the like (though this would make sports more interesting…and dangerous. I say we go for it!).

I think of churches and cathedrals with great vaulted ceilings that make the space more accommodating to larger gatherings of people who wish to worship with no walls or supports between us. And the higher the dome or vault, the more awe-inspiring the space seems to be. And if an artist were to paint murals of the heavens on these vaults, well that is all the better.

Expanse and Firmament do not conjure up any of these images for me.

BUT…we aren’t talking about a building or a temple of some sort in Genesis 1:6. We are talking about creation itself. A creation that states in extremely clear terms that above our heads exists a dome, a vaulted dome that serves a purpose. Actually, it is said that it serves a couple of purposes.

The dome, in verse 6, is given the task of holding back the waters that are above from the waters that are beneath. The waters covered everything in the beginning and this dome serves the purpose of separating them (remembering that as far as Genesis 1 goes, we still don’t have any dry land yet).

In verse 14 (I know we aren’t there yet, but just hear me out), the dome is where God placed the stars, the moon and the sun in order to separate the darkness from the light.

Of course, I don’t know anyone (thankfully) that actually believes there is a dome in the sky that is holding back waters. Nor do I know anyone who thinks that the sun, moon and stars reside in such a dome.

Most people I know go with the predominant understanding that there is no dome. There aren’t any waters either, waiting to find a crack in the dome and make their way back to the ground. The stars are not housed in an arch that stretches across the sky.

The earth is not flat, but round.

The earth is not stationary, but constantly on the move in more ways than one.

So…What Do We Make of This?

I think there are a few things that we as serious Bible readers can and should do…and a few things we shouldn’t. But, let’s be positive and start with the do’s!!!

1.) Understand that the Bible was written long ago by people who didn’t have our understanding of the cosmos.

This should be more than obvious. They wrote about things as they understood them, not as we do. Divine inspiration does not mandate that the human author write “accurately” about the cosmos. If it did, I would be forced to either give up all my current understandings of the universe and accept that there are primordial waters housed overhead by a vaulted dome…a dome that is the platform for the circuits of the celestial beings. To be honest, I am not certain I could believe this!

2.) Attempt to understand why this account of creation is told the way it is.

Before we think, “The Bible is inaccurate and therefore untrustworthy…we should toss it out!”, we might want to consider just how a story like this might operate in the everyday lives of those who originally told and heard the story.

Take for example my blog on Genesis 1 where I talk about how the ancient people understood the primordial world. It was covered in darkness and water. No life. No order. No meaning. USELESS!!!

But then God said, “Let there be light.” Light into the darkness. Order from chaos.

He then said, “Let there be a vaulted dome…” because water represents (and is) chaos in the ancient mind. Mighty storms roll in from the water. Giant monsters live in the water. Tsunamis and floods wreak havoc, destroy and cause mayhem…chaos.

But God is a God of order, not chaos. The idea of a dome, though undoubtedly understood as a literal dome by ancient people, served a purpose that is poetically embedded in the text.

It serves the purpose of creating order. It pushes back the evil, the dark, the water. It pushes these realities to the outer edges of creation, creating space for life and flourishing, fruitfulness and multiplication.

What We Shoudn’t Do (in my opinion)

I also think it is a mistake to reject any and all science that seems to be in conflict with the Bible. I don’t believe there is a dome in the sky, holding back chaotic waters. Not only that, but my faith does not have an issue with this. I do not shake my fist at science and proclaim, “One day, you will all see the truth. There is a dome!!!” No, my faith is capable of allowing the text to speak for itself.

The original authors believed there was a dome. So be it. I do not.

But, at the heart of their story, there is a truth that seems to me to be unquestionably true.

We love order and see it all around us. Order creates life and flourishing. By order we set our clocks, navigate our travel, plan our meals and live fully. But we are also always aware that evil and chaos is not far away. We are on the dry land, but chaos can strike at any time and disrupt our pretty and ordered lives. Sometimes it feels as though the dome is in need of repair as despair and tragedy come crashing down. This is a reality that is not bound by time and culture. It is ubiquitously true.

There are some who may feel ashamed that such “untruths” are in our sacred texts…that in the beginning their was a dome. I, for one, feel not an ounce of shame or embarrassment. I embrace the story, not because it holds some ultimate scientific truth, but because it holds out an even greater truth about life and my experiences…experiences that are not too dissimilar from that experienced by those people of old who told this story.

If I feel any shame at all, it is this. As believers and followers of God, we have not done what the ancients did. We haven’t taken the world around us, as we understand it, and written poetically and truthfully about our God and life. We are too busy making Genesis support science or making science support Genesis.