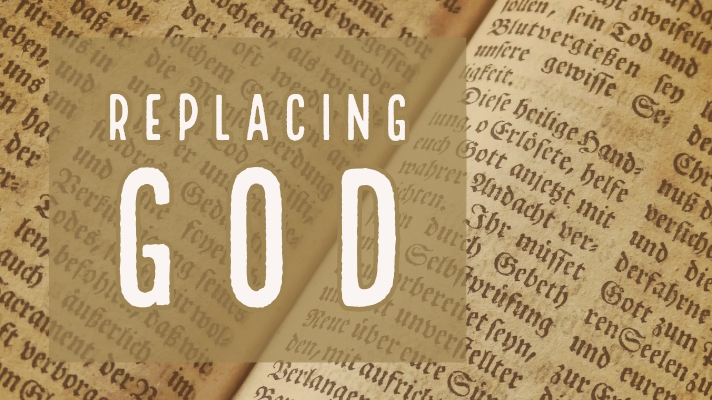 I have an inner fear.  It is one that I have expressed to myself in private and one that continues to meander through the many twists and turns of my mind.  It is, I believe, a healthy fear.  It isn’t the type of fear that can render a person incapable of progress, paralyzing them in some sort of spiritual stupor.  It is the kind of fear that I think we are meant to experience.  The kind that forces us to reexamine our presuppositions and previously held beliefs in order to either substantiate what we have been thinking or move us forward from where we are to where we need to be.

“What is this fear?”, I hear you wisely ask.
It is this:
I am afraid that I have been replacing God.  I struggle with the ongoing perception that the creator of life and wonder has been moved to the side, maybe even relegated to an object, replaced by something that is seemingly (perhaps) easier to relate to and grab hold of. Easier to control.  I have been asking myself if I have been worshipping a religious relic, replacing God with a manmade object, even if the manmade object is, in and of itself, a good and needed thing.

I am speaking about the Bible.
Have I replaced God with the Bible?
(for those of you who are tempted to stop reading and judge me, I humbly request that you hear me out before you declare me a heretic, a modern “unclean” person in your midst)

I think a better comparison can be made that more adequately makes my point.
I am suggesting that, perhaps, Scripture has become like the fiery serpent that Moses made, at God’s command, when being afflicted in the desert with venomous vipers due to the grumbling and complaining of God’s newly chosen people. This peculiar and wonderful (and somewhat scary) story comes to us from Numbers 21 and, as far as stories about ancient Israel are concerned, isn’t all that surprising.  They are grumbling, again, and their actions have provoked an unleashing of deadly serpents.  God commands Moses to make a graven image (this part actually is surprising) so that the people can turn to it, be healed from their bite, and live.  Setting aside for the moment that God commanded them to do something that was previously restricted by the 10 Commandments, we see in this story that the image, in this case, was God breathed … God inspired if you will.  The golden serpent on a pole was an absolutely good thing.  But, it took a turn for the worse when it became something it was never intended to become.

Centuries later, in 2 Kings 18, we see that King Hezekiah is making much needed reforms as the people of God have turned to idolatry.  He is tearing down the high places of pagan worship and the Asherah poles.  Then, in verse 4, we see him breaking to pieces a very specific idol called, “Nehushtan”.  This is a Hebrew word that sounds similar to both “golden” and “serpent”, and it is said to be none other than the serpent that Moses had formed all those hundreds of years ago, in the desert, at God’s command.

This is incredibly bizarre. God had Moses make an image and commanded that the object be lifted up so all who gaze upon it could be healed, knowing that this good and needed object would one day be misused and worshipped (isn’t that the point of the command to make no graven images?).  God commanded it knowing that they would be replacing God with it.  The God-given object had become a replacement for God.

But, the obvious problem is this:
That the golden serpent on the pole could never be God, nor was it ever intended to be God.  It had a purpose, but the purpose was not to replace God nor represent him in some way.  The Israelites had taken this God-given image and assigned a purpose to it that went far beyond its capability.

So, I ask myself, is this what I have done with the Bible?  Is this what western Christianity has done with our God-inspired object?  Have I (we) replaced God with something God-breathed? Have I (we) assigned a purpose to the Bible that is beyond its capability?

It is tempting to speak for everyone, but I will not.  I can only express my own, internal fear and project that outward as I think I see the same thing happening in the religious, Christian world around me, but cannot be certain of it.

Here’s a question that I think can help us deal with my struggle, and possibly your struggle as well.
Does the Bible point outside of itself?  Is the Bible, like the serpent, meant to point us towards God while also being fully aware that it is not God?

I believe the answer to this is, “yes”.  In many places and in many ways (as we will see in this blog series), the Bible consistently points us beyond its pages to a God that lives and works outside the margin.  Just as the serpent is incapable of being God to the people of our ancient spiritual ancestors, Israel, so too is the Bible incapable of doing what only God can do.  The Bible cannot replace God anymore than the fiery, desert serpent was able to replace him.  When the object that is meant to point us to God replaces God, we will find ourselves lifting it up on the high hills our of spiritual and religious landscape instead of worshipping the true God to whom it points.

Which, when you think about it, makes the passage from the gospel of John, chapter 3, even more meaningful and powerful.
As Jesus is having an incredible discussion with Nicodemus about rebirth, about water and spirit, about an uncontrollable wind/spirit that comes and goes when, where and as it pleases, Jesus says these words in verse 14:
“And as Moses lifted up the serpent in the wilderness, so must the Son of Man be lifted up…”

Jesus told him that Nicodemus was a teacher and that he, as a teacher, should already know these things.  But, somehow, even as a teacher, Nicodemus had missed it.  As the story in John unfolds, Nicodemus doesn’t always miss it.  He is there, with Joseph of Arimathea, burying the one who had just been lifted up.

This time, “the serpent” could not be twisted into a false god…some sort of replacement for the true God who made all…some sort of god that we think we can control and manipulate to our own desire.  This time, the one who was lifted up was the WORD – the living, breathing, embodied WORD – who was with God, and who was God, in the beginning, and who now has come and tabernacled with us.
Turn to him, and you will never worship in vain again.  Let the Bible be what it is mean to be: a God-given, God-breathed object that points us to him.

Lift up this WORD, and nothing else, because the lifting up of anything else is bound to have us replacing God.